Listen which URLs an app tries to connect

Is it possible to listen/monitor an app's network activities?

I have this one app, and I couldn't figure out where it gets its images. I tried to google an app to listen to other apps connections, but I didn't find any. I'm looking for similar functionality as Google Chrome's network tab from developer menu. 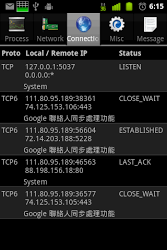 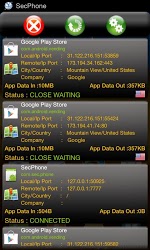 As you can see, OS Monitor lists up all connections, and lists the corresponding app "owning" this connection along. This should enable you to see all servers your suspicious app connects to. There are other apps available with the same feature as well, as e.g. Connection Tracker shown in the second screenshot.

If you really need the full URL, the above won't bring you there (both apps use methods similar to netstat, which only reveals the hosts). Instead, you might want to take a look at e.g. tPacketCapture, which "sniffs" your network traffic (without requiring root), and saves the protocol in so called .pcap files. These again can be read then by e.g. Shark Reader.

I have been using Packet Capture app, which for me is simpler than setting-up "wireshark" on Android.

The app is free, doesn't require root access, but may request to install user certificate to decrypt SSL connection (it's using MITM technique, as mentioned on its app page; you don't need to install it if you don't want to know the content of SSL connection)